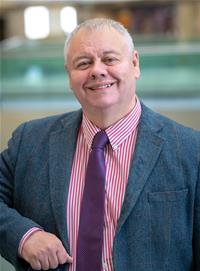 Title: Leader of the Council

Neil was born at Fairfield Hospital in 1963 and attended Cardinal Langley RC Grammar School in Middleton. He went on to achieve an honours degree in Modern Languages (Spanish/French/Catalan) from the University of Wales and studied at The Sorbonne in Paris and at Valencia University in Spain.

He has represented West Middleton on the council since 2010 and previously represented the former Heywood South Ward from 1986 to 1994.

He has worked as a Senior Caseworker for an MP and previously worked as community development officer for Cheshire, Halton and Warrington Race and Equality Centre and as project manager at Freehold Community Base in Rochdale.

He enjoys travel, reading, listening to a wide cross-section of music. Neil was a competitive figure skater during his teenage years and still follows the sport.